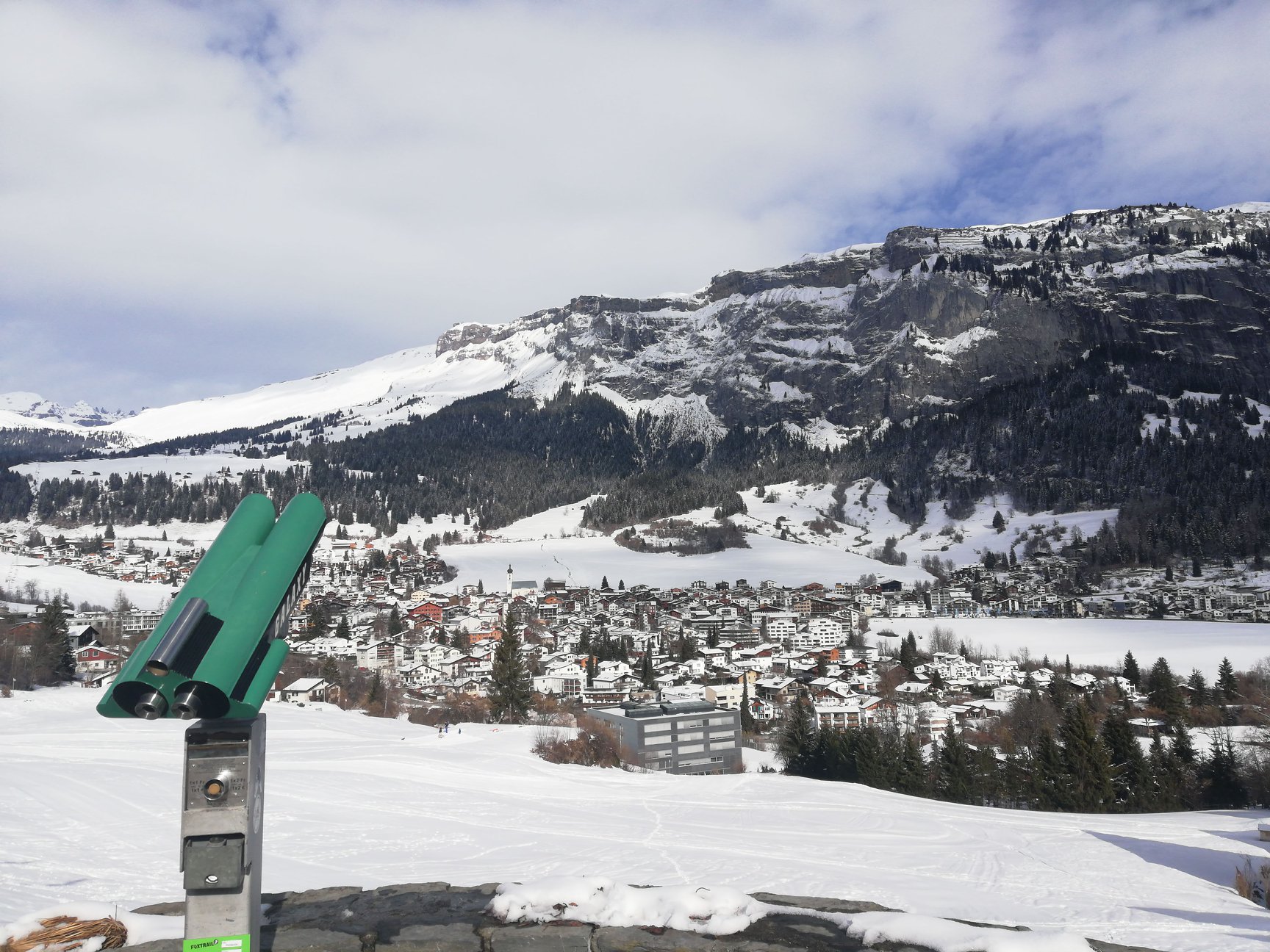 The Laax ski area near Falera and Flims is one of the most attractive and largest ski areas in Switzerland and a mecca for snowboarders. Thanks to 188 kilometers of slopes in all levels of difficulty, four snow parks and a high level of snow reliability, winter sports fans get their money’s worth here. And when it comes to après-ski, Laax is right at the forefront.

The municipality of Laax in Switzerland consists of the three villages Flims, Laax and Falera. It is located on a sunny plateau in the canton of Graubünden at an altitude of 1,020 m. The nearby ski area is one of the largest in Switzerland and has developed into a mecca for snowboarders. It offers them the largest halfpipe in Europe and four fun parks with numerous obstacles.

There are also various freeride areas where adventurous boarders can let off steam.

But skiers also get their money’s worth in the Laax ski area. You can expect around 188 kilometers of slopes in different degrees of difficulty. There are also ski routes with a total of 37 km. 77 km are blue, 90 km red and 20 km black. 28 lifts ensure that winter sports enthusiasts reach their destination.

It doesn’t matter whether visitors start their tour from Laax, Flims or Falera. From each of the three villages you can enjoy direct access to the ski area.

Aside from sports, the region around Flims, Laax and Falera has a lot to offer. This includes numerous opportunities for après-ski and stopping off in rustic ski huts. Families can look forward to childcare options and slopes especially for newbies. Equipment can be bought or rented on site. Ski and snowboard schools give beginners the opportunity to prepare for their first descent in peace.

Around 1,800 hours of sunshine a year increase the chances that the weather will play along during your skiing holiday. Since most of the facilities in the Laax ski area are located at an altitude between 2,000 m and 3,000 m, there is usually guaranteed snow. A snow depth of around 300 cm on the mountain is not uncommon. On average it is a proud 236 cm. All of this is reflected in our expert reviews. 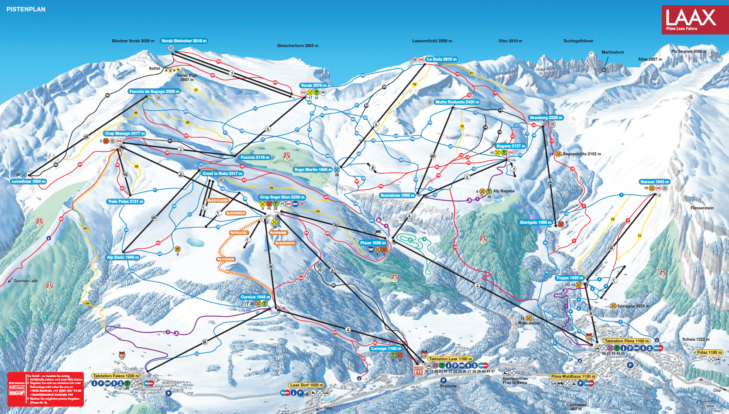 3) skiing in the Laax ski area

Laax is a superlative ski area. As one of the largest of its kind in Switzerland, it has a lot to offer skiers and snowboarders with the most varied of expectations. This includes varied slopes of various levels of difficulty. The slope on the Crap Sogn Gion, known as “Fatschas”, is particularly popular with advanced skiers. It used to be the venue for world cup races.

Today it gives amateur athletes the opportunity to imitate the pros and show off their own skills in a spectacular way. Much of the slope on the Cassons is not groomed, which makes it a preferred destination for deep snow fans. Lovers of endless pistes opt for the 17 km long descent from the glacier into the valley.

Beginners also have the opportunity to let off steam in the Laax ski area and improve their skills bit by bit, for example on the slopes around Alp Dado. Four snow parks attract enthusiastic snowboarders, as does the largest halfpipe in Europe with a height of 6.90 m, which is unique in the world, which means a total of over 90 obstacles.

The snow parks are also aimed at drivers with different levels of experience, from beginners to freestyle professionals. Children can expect snow wonderlands in Laax, Flims and Falera. There is plenty of fun and excitement here. The little ones also learn to ski on the side – with good supervision. The ski and snowboard school in Laax gives young beginners as well as adults the opportunity to

Cross-country trails with a total length of 62 km offer a sporty change from the descent or the snow park. Thanks to the easy level of difficulty, beginners in particular get their money’s worth and are rewarded for their efforts with picturesque views. There is also a dog trail in the region. A Swiss cross-country ski pass is required to use the cross-country trails.

The season in Laax lasts from the beginning of November until April and comprises 155 days, which is also more than the average for Swiss ski areas.

All of these properties are reflected in our expert reviews. In “Families & Children”, “Advanced Skiers & Freeriders” and “Snowparks”, the Laax ski area was given the top rating of five stars, and otherwise it also scores above average.

The Laax ski area consistently receives top ratings from our experts, both for the top criteria and for “family friendliness” or in terms of “gastronomy and après-ski”. This proves the exceptional position of this popular destination for snowboarders and skiers. The top evaluation criteria, evaluation criteria for special interests and other evaluation criteria are decisive. They are weighted differently in the overall result of 4.4 points.

Winter sports and partying go hand in hand in Laax, Falera and Flims. After all, the ski area with its excellent conditions for snowboarders attracts many young people who like to party after a day on the slopes. The selection of clubs and bars is correspondingly large, and the après-ski offer received four stars in our expert rating. This includes the “Crap Bar” at the valley station in Laax.

Here you can relax on the sun terrace while a DJ provides the right soundtrack. Alternatives for long nights in Laax are the “Indy Bar”, the “Riders Palace Club” or the “2nd Club” as well as the “Legna Bar” and the “Arena Bar” in Flims. There are also opportunities for après-ski in Falera. In addition, there are regular events such as concerts by national and international pop greats on site.

Visitors who like it more relaxed can stop in one of the many local restaurants. The spectrum ranges from star gastronomy with international culinary highlights to cozy inns with local specialties. Whether rustic or extravagant: The selection is varied and family-friendliness is a top priority. The gastronomic offer in the Laax ski area has earned five stars.

Hiking fans have the opportunity to set off into the mountains on snowshoes and explore the unique nature in the area surrounding the ski area. Knowledgeable guidance ensures that you keep your bearings. Toboggan runs promise fun for the whole family.

Laax in the canton of Graubünden is the center for snowboarders in the ski area of ​​the same name and offers direct access to the slopes, fantastic views of the surrounding mountains. Despite its popularity with young winter sports enthusiasts, the place has retained the charm of an original mountain village to this day.

Numerous old houses testify to this, the oldest of which dates back to the 16th century. Two lakes belong to the place, the Laaxersee and the Lag digl Oberst.

The largest town in the region, Flims, presents itself as an elegant health resort with lots of shopping opportunities and diverse gastronomy. Numerous wellness hotels give visitors the opportunity to combine winter sports with luxury and relaxation. Flims is also the ideal starting point for winter hikes. This makes Flims a popular holiday destination for nature lovers even in summer.

The smallest place in the group is Falera. Closed to motorists, the picturesque village may only be entered on foot or driven through with a special permit. The Church of St. Remigius and the megalithic complex Parc la Mutta are among the outstanding cultural sites in Switzerland and are popular sights.

For the nearby Sagogn, this role is fulfilled by the Church of the Assumption of Mary, one of the best preserved churches from the high baroque period. Sagogn mainly attracts cross-country skiers who want to go on the surrounding trails. Apart from that, there are also numerous starting points for winter hikes here.

The same applies to the little trin. This is especially popular because of its calm and tranquility. If you need a break from the hustle and bustle in Laax, you will find relaxation in picturesque nature and the opportunity to explore the area on cross-country skis.

7) Arrival in the Laax ski area

The Laax ski area can be easily reached in various ways. By car from Basel or Zurich, the A3 or A13 to Chur are ideal. From the Reichenau exit, route No. 18 leads to Laax.

Train journeys also initially lead to Chur or the even closer Ilanz. The onward journey succeeds with the Postbus. Visitors to the resort who arrive by plane in Zurich, Friedrichshafen or Memmingen also have the option of using the airport shuttle. This brings you directly to the Laax ski area. It is important to reserve in good time (at least 48 hours before arrival). Zurich and Friedrichshafen are each only around 150 km from Laax. 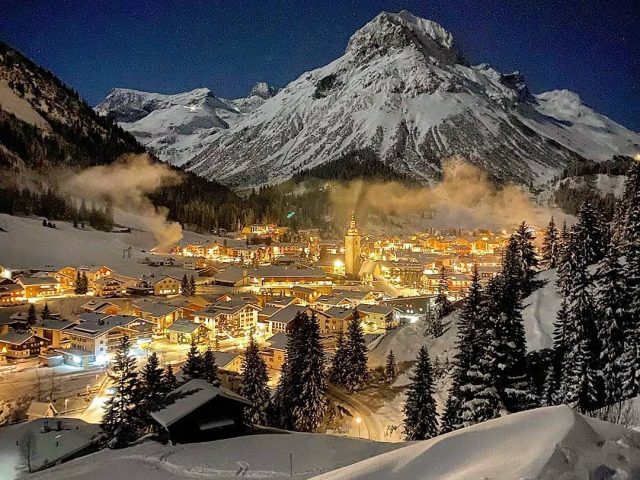 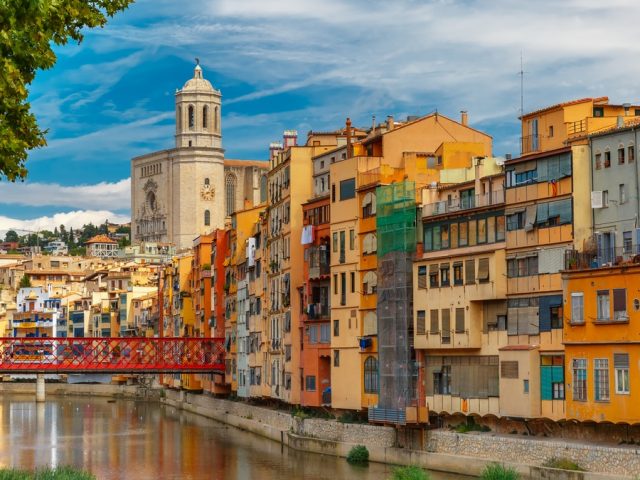 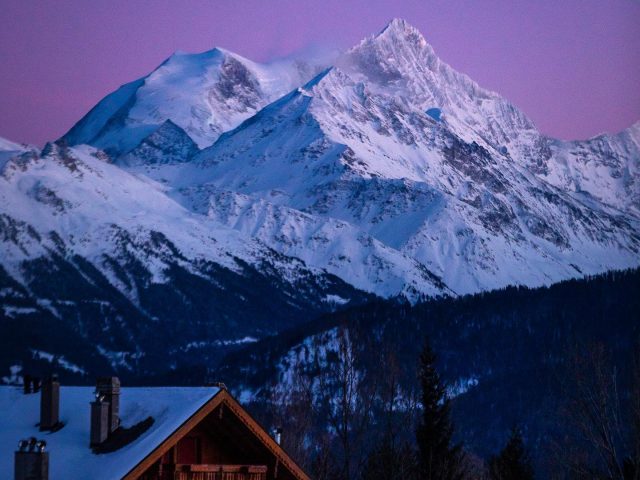 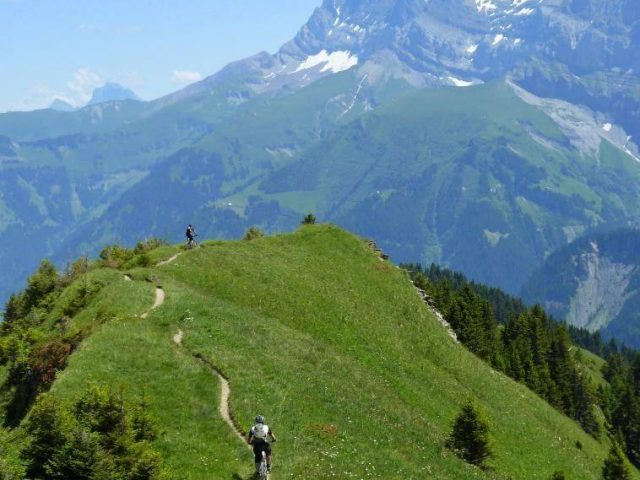 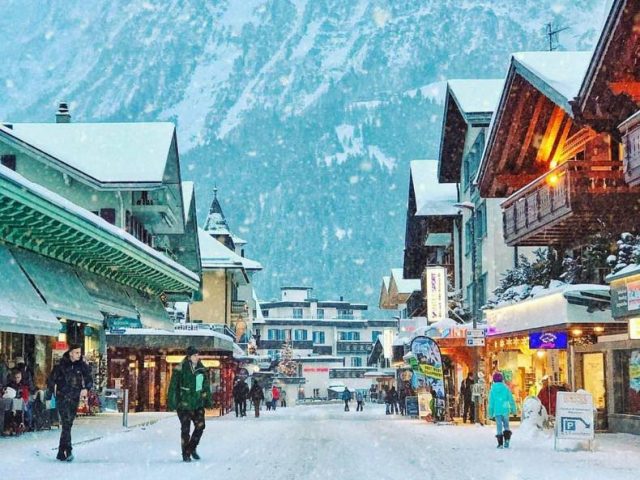 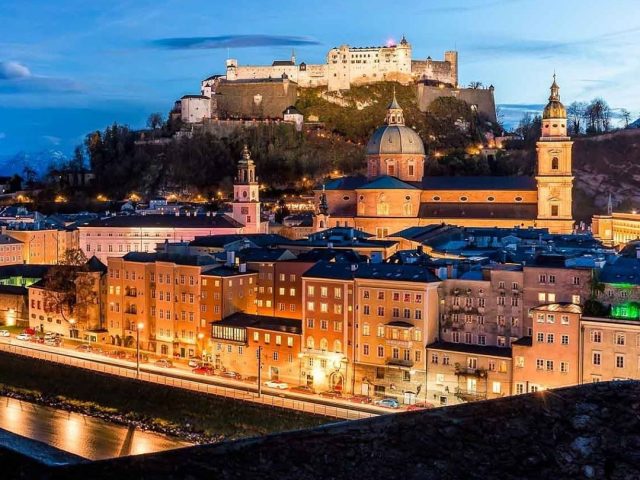 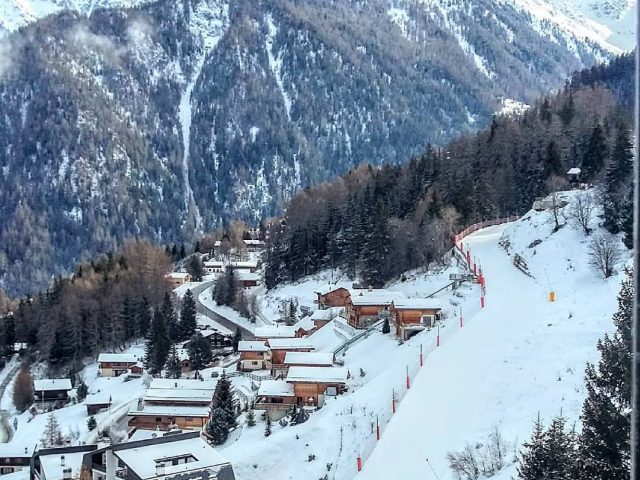 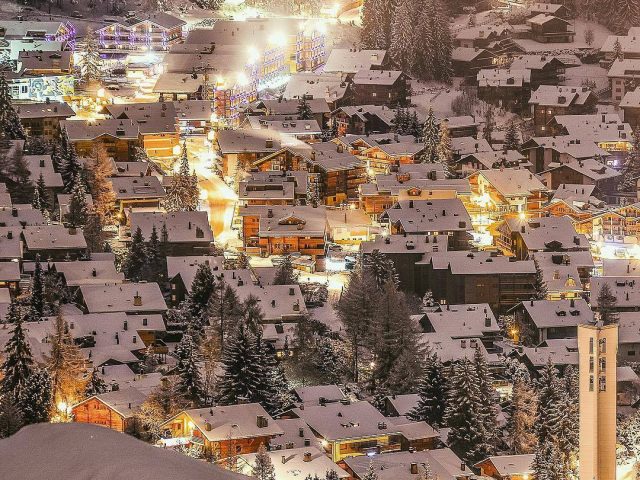 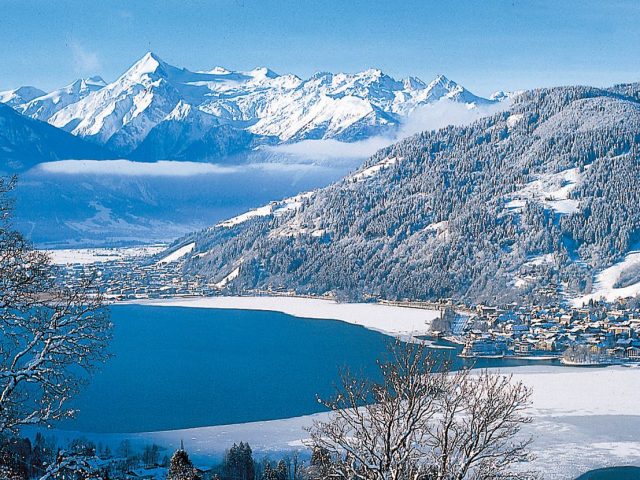 Zell am See – Excellent resort for Summer and Winter with a beautiful lake, Skiing, Biking, Golf, Hiking. Lovely Hotels and Apartments with some great Nightlife – 1 place we recommend – Glacier
Zell am See